The office of Admiral of England (Lord High Admiral) was created around 1400, though there were before this Admirals of the Northern and Western Seas. In 1628, Charles I put the office of Lord High Admiral into commission and control of the Royal Navy passed to a committee in the form of the Board of Admiralty. In 1831 the Navy Board was abolished as a separate entity and its duties and responsibilities were given over to the Admiralty. The design of the flag of Lord High Admiral was modified in 1929, the size of the anchor was improved, the shank was widened and the length of the anchor increased. The shape of the stock was changed, and its size increased. The cable, which had been behind both stock and arms, was altered to pass in front of the upper stock and lower arm. The flag has the same red as the Royal Standard.
Read more 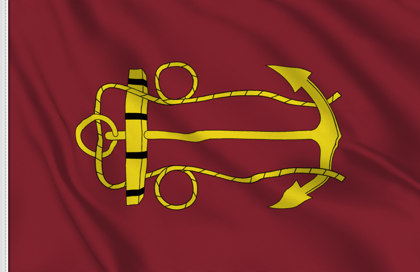