Duke of Edimburg Flag on Sale

The Duke of Edinburgh is a British royal title, named after the city of Edinburgh, Scotland, which has been conferred upon members of the British royal family only four times since its creation in 1726. The current holder is Prince Philip, the royal consort to Queen Elizabeth II. He is the United Kingdom's longest-serving consort and the oldest serving spouse of a reigning British monarch. The flag is divided into four quadrants. The first represent a semée of hearts Gules and three lions passant in pale Azure (For Denmark), the second has a blue background with a white cross (For Greece), in the third there are two pallets Sable (For Battenberg or Mountbatten) and in the fourth upon a rock Proper a castle triple towered Sable (For Edinburgh).
Read more 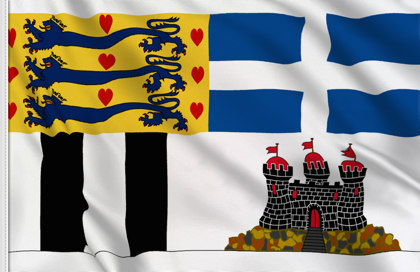