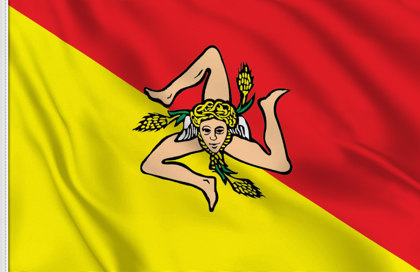 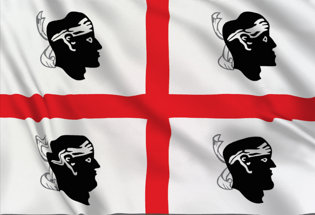 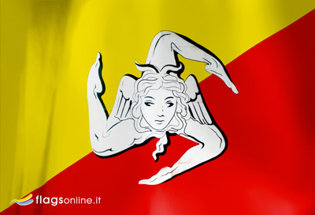 The flag of Sicily was adopted in 1282, after the revolt of the Sicilian Vespers against the king Charles I of Sicily. This flag is similar to the flag of the Isle of Man.

The flag is characterized by the presence of the triskelion (trinacria) in the centre, the winged head of Medusa (Gorgon) and three wheat ears. The three bent legs represent the three points of the triangular shape of the island of Sicily, or the historical three valli of the island. The present design became the official public flag of the Autonomous Region of Sicily on 4 January 2000.

The flag is bisected diagonally into regions colored red and yellow, red represents the municipality of Palermo and yellow represents Corleone, which in medieval times was an agricultural notoriety city. Palermo and Corleone were the first two cities that founded a confederation against the Angevin rule. Today, the triskelion (or trisceli) is also widely considered the actual symbol of Sicily. The symbol is also known as the trinacria, that is the ancient name of Sicily.