The Official flag of the Bergamo soccer team. The flag of the football club Bergamasca Atalanta is in black and blue, with the shield of Atalanta in the center of the flag; the shield is of oval type often also called shield of the ladies, inside the shield in the upper part there is the writing Atlanta and in the lower part (1907), the year in which the football team was founded, at the center of the shield is present the portrait of the Princess of the Arcadia daughter of Iasi the king; often the figure and the society itself are called Goddess. 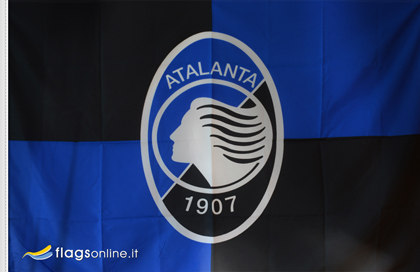