The Rusyn flag is the flag of the Rusyns also referred to as Carpatho-Rusyns, Carpatho-Russians, Ruthenians, Ruthenes, Rusins or Rusnaks, a Slavic ethnic group which speaks the Rusyn language. In Hungary, the Czech Republic, Poland, Serbia and Slovakia, the Rusyns are officially recognised as a national minority. 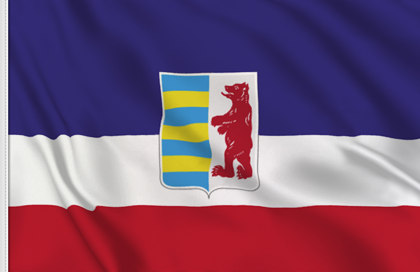 Rusyns, also known as Ruthenes are a diasporic ethnic group. They speak an East Slavic language known as Rusyn and descend from Ruthenian people who did not adopt the use of the ethnonym "Ukrainian" in the early 20th century. As residents of the Carpathian Mountains region, Rusyns are also often associated with the Slovak highlander community of Gorals.

The flag of Carpathian Ruthenia was adopted on the 20th of August 2015.

The flag is blue, white and red ; with the coat of arms in the center.

The ruthenian Coat of Arms was established only in 1920 by Czechoslovakian Law. Before 1920 many projects existed.
In spring of 1920 prof. Gustav Friedrich designed Coat of Arms looked like modern one, but the dexter part was blue with gold patriarchal half-cross.