The only inimitable state flag of Paraguay, official flag that sees the side recto differ from the side towards. This is the national flag of Paraguay adopted in 1842 and revised in 2013. The flag has an official ratio of 3/5. Based on Law No. 5209 of December 1, 2014, there are 4 measures. The first measure is 270x500 cm, the second is 120x300, the third is 90x150 and the fourth 20x60 cm. The recta version is composed of the tricolor with a shield in the center with two branches of palm and olive and a five-pointed star in the center. On the reverse the flag has a shield with the image of a lion accompanied by a Phrygian cap and the words "peace and justice". The flag is made of nautical polyester with the application of the shields for the 1st and 2nd dimension, while for the remaining ones is used the nautical polyester with a black core.
Read more 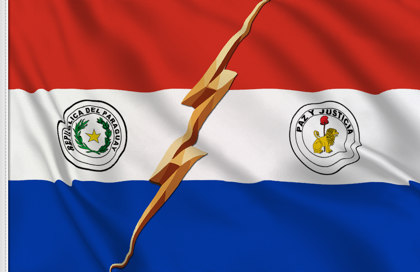