Flag of the Football Club of Bologna, the official version proposed was adopted in the 1970s, but the company was founded in 1909. The flag is composed of a white background, with the emblem of the Bologna football team at the center. The emblem of FC Bologna is composed of a shield of oval type or also called shield of the ladies, the shield is interposed in pergola, in the upper part there is the writing BFC 1909, to the left of the red and blue vertical bands that represent the uniform of the team, on the right there is the cross of San Giorgio bordered with gold. The Football Club Bologna 1909 is the football club of the city of Bologna, commonly known as FC Bologna. 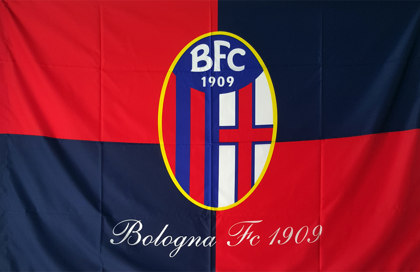