The State Flag of the Kingdom of Sicily under the Ferdinand IV of Bourbon (III of Sicily and I of the Two Sicilies). The Swabian eagle on his chest shows a shield consisting of the crowns of the Farnese family, coat of arms of León, Portugal, Anjou, Aragon and Swabia, Burgundy, Kingdom of Jerusalem, Medici and Bourbon-Anjou. The flag is trimmed from the collars of the Order of the Golden Fleece, the Order of the Holy Spirit, that of the Sacred Military Constantinian Order of Saint George, the Royal Order of San Gennaro and the Royal Order of St. Ferdinand and Merit. The emblem is placed at a position corresponding to 1 / 3 the length of the flag starting from the auction.
Read more 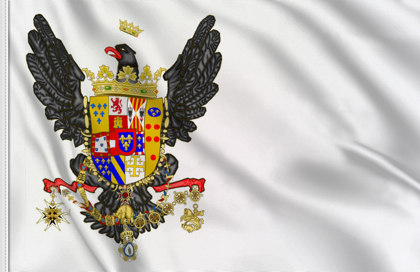