The flag of Brescia is represented by a bipartite banner, vertically, of white and blue. The flag is displayed outside the Municipality of Brescia, in Palazzo Loggia, on the homonymous square where a bomb caused the death of 8 people, on May 28, 1974, during an anti-fascist demonstration. 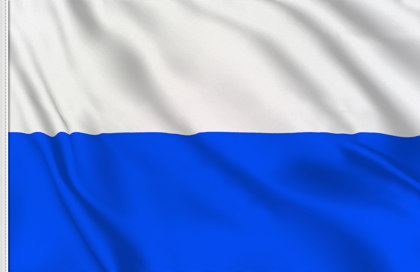 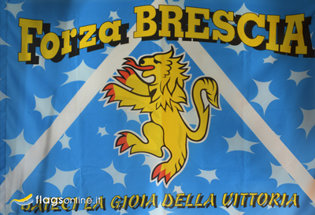 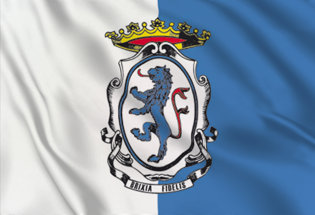 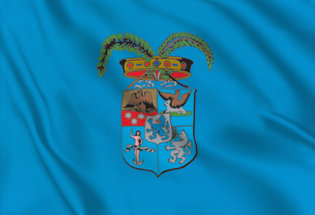 There are 2 types of flag of Brescia, one and match in 2, colored white and blue and is the most recent while the other flag is composed of a truncation in 2, the upper part is colored white while the lower part of blue . The truncated flag of white and blue is the oldest and was adopted in 1976, then became a match flag and finally in 2000 the current official flag of the province.

Flag of Brescia city, adopted in 1925. Brescia municipality has a surface of 90 km with a total of 200 000 inhabitants called Bresciani and having an average density of 2 000 inhabitants per km. The mayor of the municipality of Brescia is Emilio del Bono elected in 2013 of 10 June. The festive day dedicated to the patron saints is February 15th, the Patron Saints of Brescia is Santo Faustino, Santa Giovita and Santa Angela Merci. Brescia is renamed as Leonessa d 'Italia. Brescia has two types of blazon for its coat of arms, the first is "silver to the blue lion, armed, tongue and red-colored." Motto: "Brixia Fidelis".

The shield will be cimato from a crown to five fioroni and four points gemmate ", while the second resumes an ancient blazon of the Kingdom of Italy Napoleonic" The good city of Brescia silver brings the leopard red leolonito with the turned tail terminated by the head of green with the golden letter N placed in the heart and juxtaposed by three roses with six leaves of the same. Cimato from the Mural crown to seven golden merlons, surmounted by the naturally rising eagle, holding a golden caduceus in the band between the claws, all accompanied by two festoons intertwined with gold and oak of the last, divided between the two rejoined and hanging sides of the tip ".